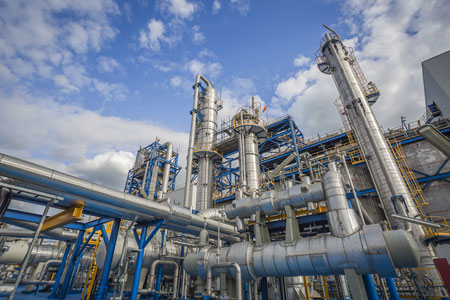 Regulatory agencies are tightening selenium discharge limits in a range of industries, including oil refining. Across the US for example, a growing number of states now require refiners to implement wastewater treatment processes to reduce effluent selenium levels.

In oil refineries, selenium concentrations are generally the highest in the effluent from the sour water stripper (SWS) or so called “bottoms”. Therefore, effective treatment of this relatively low volume stream is advantageous from a chemical and cost efficiency standpoint. Concentrations of selenium in the SWS bottoms can vary widely depending on several factors, most notably the crude slate being refined.

The predominant species of selenium in the SWS bottoms is a form that is complexed with cyanide – selenocyanate (SeCN). To permit effective coagulation & removal of selenium, an oxidation step is first required. Hydrogen peroxide has been shown to be extremely effective at oxidizing the SeCN complex to produce free selenite (Se+4). Once in the selenite form, the use of iron-based coagulants along with a polymer form a dense selenium containing floc that can be readily separated by settling in a clarifier, or floated in a dissolved air flotation (DAF) unit.

USP Technologies experience with refinery selenium treatment programs has shown that prudent control of hydrogen peroxide feed rates is important to ovoid over oxidation of selenocyanate to selenate (Se+6). Selenate is more soluble than selenite and does not respond well to coagulation/precipitation.