Sulfide odor control within sanitary sewers has been practiced for over 50 years, yet only recently have substantive advances been made. Where once the choice of chemical treatment was either chlorine or iron salts, safer and more environmentally benign technologies based on nitrates, hydrogen peroxide, and/or magnesium hydroxide have gained acceptance. These new alternatives, however, can increase treatment costs substantially and present limitations in themselves. Therefore, it makes sense to explore new avenues for lessening the adverse impacts of the older, cheaper mainstays, particularly iron salts (ferrous/ferric chloride or sulfate) that provide other benefits to wastewater treatment operations.

PRI-SC® (Peroxide Regenerated Iron-Sulfide Control®) is a combination treatment that integrates iron salts with hydrogen peroxide (H2O2) in a synergistic fashion. At the most basic level, PRI-SC® treatment may be viewed as an oxidant (hydrogen peroxide) regenerating the spent iron salt (FeS) in-situ, yielding fresh ferrous (Fe+2) or ferric (Fe3+) iron and colloidal sulfur.
The conceptual basis of PRI-SC® is to use the iron for primary sulfide control, and use the H2O2 to regenerate the iron from FeS. The form of iron that is generated can then be directed toward various subsequent applications.

In practice, PRI-SC® involves adding an iron salt at the upper reaches of the collection system and using hydrogen peroxide to regenerate the “spent” iron (FeS) at one or more points downstream. The analogy is one of a capturing agent (iron salt) added at the top of an interceptor, which then absorbs dissolved sulfide as it moves down the line. Intermittent hydrogen peroxide injection serves to regenerate the capturing agent thereby allowing additional sulfide to be absorbed downstream. In contrast to other sulfide control chemistries, iron and PRI-SC® function for sulfide control in sewers under anaerobic conditions. As such, sulfide control with these iron-based technologies does not consume soluble BOD in the manner that aerobic or anoxic treatment strategies do. Ultimately, iron-based technologies allow for the fermentation of soluble carbon to continue in the system. 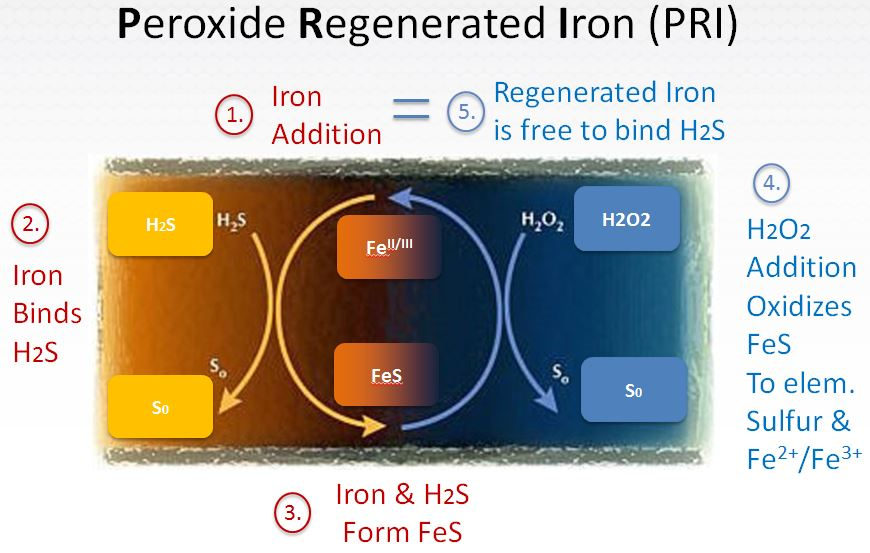 The combined treatment provides cost benefits superior to either chemical alone, while allowing greater flexibility as to the placement of storage and dosing facilities. For example, practical control of sulfides to very low levels (e.g. < 0.1 mg/L dissolved sulfide) is afforded with minimal reaction time (< 5 minutes). Other benefits are accrued to the reaction, including: reduced solids (FeS) loadings, accelerated reaction rates and enhanced flocculation (in clarifiers).

The inherent cost benefit of PRI-SC®, compared to traditional iron salt use, is derived from the relative cost and demand of the two chemicals. Based on current market data, the use of PRI-SC can yield a savings benefit of 30% to 50% as compared to treatment with iron salts alone. 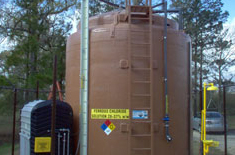 This is a sample 7,800 gallon ferrous chloride (FeCl2) storage and dosing system installation within the collection system of a large Southeast municipality.