On a late Friday afternoon in June, a call came in to USP Technologies: a major poultry processing plant in the Southeast was in danger of violating their wastewater discharge permit. They needed a solution fast or face fines, a temporary shutdown of operations and significant lost revenue. 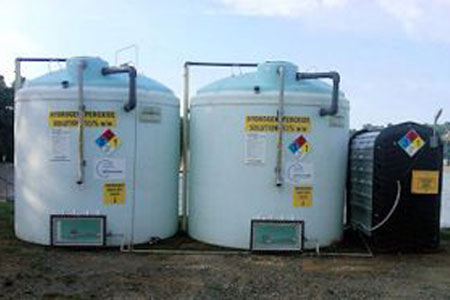 The poultry plant’s 3.5 million gallon aerated wastewater treatment lagoon was unable to maintain sufficient dissolved oxygen (DO) and was unable to achieve ammonia and biological oxygen demand (BOD) removal requirements. These conditions were brought about by a combination of warm seasonal temperatures of over >90 F, (lower O2 solubility) and higher than normal chemical oxygen demand (COD) loading to the treatment system. In addition, the oxygen depleted lagoon was generating significant hydrogen sulfide (H2S) odors.

The solution was a turn-key hydrogen peroxide dosing program to supplement the plant’s aeration equipment and get the lagoon DO levels back to a target range of 2 – 3 mg/L . (See Supplemental Dissolved Oxygen for chemistry details on use of H2O2 for supplemental dissolved oxygen in biological treatment systems)

The USP Technologies’ Engineering team reacted quickly, working over the weekend to prepare an appropriately designed storage and dosing system and overnight shipping it to the site for installation in the field. The Team mobilized on Sunday to install and prepare the systems for a Monday start-up. By Monday afternoon, the hydrogen peroxide system was fully installed and dosing started at about 3:00 pm, a mere 72 hours from the initial phone call from the poultry plant.

Sampling of the lagoon by USP Technologies demonstrated that, within 24 hours, the hydrogen peroxide addition to the aerated lagoons resulted in measurable increases in DO and elimination of H2S odors. With continued dosing of hydrogen peroxide, the DO levels increased incrementally over the next several days. By the following weekend, DO levels were back in the 2 – 3 mg/L target range and the ammonia and BOD levels were trending downward. The plant was out of discharge violation danger. This poultry plant continued to use hydrogen peroxide for supplemental DO throughout the summer and early fall until cooler temperatures and lower COD loading to the lagoons allowed their aeration systems to maintain required DO levels on their own. USP Technologies removed the storage and dosing systems at the conclusion of the project.

Download our Case Study for Lagoon Supplemental DO (pdf)