In North America, approximately 1 billion gallons of used oil are collected annually from generators such as quick lubes, truck fleets, and manufacturers. Several companies have begun the process of re-refining this hydrocarbon-rich waste product. Re-refining allows the lubricating oil to be repeatedly re-used as a higher value product.

Re-refining involves operations which will separate and remove contaminants in the used oil so that this oil becomes suitable for reuse. The re-refining process is much like that of a traditional refinery with similar waste treatment requirements. Such was the case for a major used oil re-refinery facility in the mid-west. They had a “sour water” treatment system that was not performing as designed, resulting in operational problems and safety concerns. Sour water is hydrogen sulfide rich wastewater water that is generated from a variety of sources including hydrotreaters, reformers and hydrocrackers. 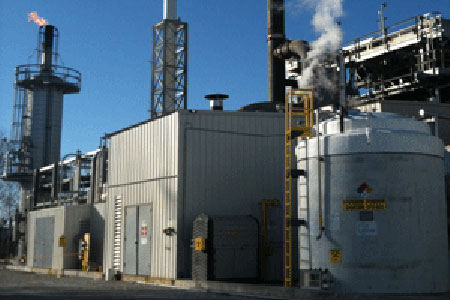 A typical scrubbing solution consists of dilute sodium hydroxide to which enough hydrogen peroxide is added to react with the hydrogen sulfide according to the equation:

The above reaction predominates at pH > 9.2, and yields soluble sulfate as the reaction product. The stoichiometry calls for 4.25 lbs H2O2 per lb S 2– and it is not unusual for reaction efficiencies to approach 100%, provided that the hydrogen peroxide is added in a controlled fashion and the reaction medium is thoroughly mixed.

Enough sodium hydroxide must be present to neutralize the sulfuric acid formed according to the equation:

This indicates that for each weight part of hydrogen sulfide, approximately 2½ weight parts of sodium hydroxide are needed.

USP Technologies provides a full scope of supply (chemicals, equipment and services) to support emergency and ongoing applications for hydrogen peroxide and a range of water and wastewater treatment chemicals.