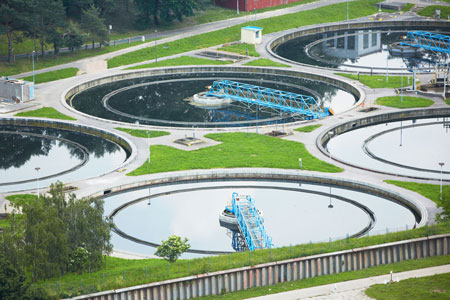 H2O2 is ideally suited to remove H2S from wastewater solids, provided that sufficient contact times are available – typically 2-5 minutes prior to the dewatering device. The efficiency of treatment depends upon the available reaction time, the initial level of H2S and the relevance of non-H2S odors. Under optimal conditions, effective dose ratios are about 5 parts H2O2 per part aqueous sulfide, and can be reliably estimated through beaker tests. The chemical reaction is as follows:

Compounding the challenge, the radicals generated interfered with the proper measurement of H2S. From the holding tank, biosolids are pumped to a dewatering building housing two belt filter presses. The turbulence of these belt filter presses causes most of the sulfide present to volatilize. A wet scrubber was installed and used for years to control the H2S, however, by 2014 it was at the end of its serviceable lifespan.

USP was invited to visit the facility to determine a more effective treatment strategy. Bench scale dose response tests utilizing shake tests were then conducted to determine theoretical hydrogen peroxide dosing needs and possible reaction times from several injection points. The optimal injection point was determined to be at the biosolids pump outlet, which provided approximately 3 minutes of reaction time before reaching the belt filter presses.

Shortly afterwards, a full-scale H2O2 storage and dosing equipment system was installed. The H2O2 pumps were connected by relays to the biosolids pumps to ensure that H2O2 only dosed while the biosolids pumps were running. The program was demonstrated to be effective within the first hour of operation, with H2S levels brought down below 1 PPM both above the belt filter presses and within the dewatering building’s main room. The program continued with dosing rates throughout the first six months ranging from 1.5 to 6 gallons/hour.

In addition, the operators were trained on how to both raise and lower dosing rates based on the observed H2S levels to mitigate variable industrial loadings. The removal of H2S from the dewatering facility eliminated the need for a costly replacement of their wet scrubber, and the customer invited USP to co-present our success story at their state conference.