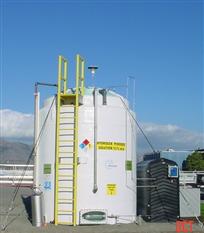 A Gulf Coast Refinery was using hydrogen peroxide (H2O2) in 55-gallon drums at their WWTU Bio Unit to supply supplemental dissolved oxygen (D.O.) to maintain target D.O. levels in the aeration basins during high COD loading periods. The drums were stored on wood pallets, which violated industry safety standards and also required handling (changing out the drums), which increased the risk of spills and exposure to operators. Furthermore, during a turnaround of an upstream unit, higher COD loading depleted the dissolved oxygen level in the WWTU Aeration Basins, resulting in ineffective treatment.

The team installed a USP Rapid Response System consisting of a 5,000-gallon temporary storage trailer and a modular dosing control system. Upon the addition of Refinery Grade 27% H2O2, a class 1 oxidizer, to influent of the WWTU Bioreactor System, the D.O. target was maintained during the high COD loading period.

USP worked with the plant’s engineers to determine the optimum dose point as well as the proper location for the chemical storage tank. The changeover occurred following the plant turnaround and was completed by the USP Field Services Team without incident and without disruption to the treatment program.