Hydrogen peroxide is well-established as an environmentally-friendly, deodorizing and bleaching agent. Its uses include organic and inorganic chemical processing, textile and pulp bleaching, metal treating, cosmetic applications, catalysis of polymerization reactions, municipal odor control, industrial waste treatment (detoxification), and control of bulking in wastewaters. These uses are continually expanding, making it a necessity not only to understand the mode of hydrogen peroxide application but the safe handling of the chemical as well. 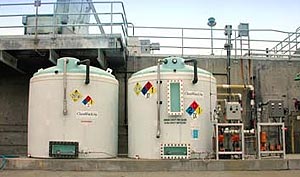 A basic understanding of the properties of hydrogen peroxide is essential to the safe handling of this chemical. Hydrogen peroxide is clear, colorless, water like in appearance, and has a characteristic pungent odor. Nonflammable, it is miscible with water in all proportions and is sold as a water solution.

The amount of hydrogen peroxide in commercial solutions is expressed as a percentage of the solution’s weight. Thus, a 35% solution contains 35% hydrogen peroxide and 65% water by weight. Most municipal and industrial applications call for 35% or 50% concentrations.

The methods available for delivery to bulk storage installations accommodate shipments of 70% hydrogen peroxide for dilution to the 35% or 50% storage concentrations. Solutions containing more than 8% hydrogen peroxide are classified by the U.S. Department of Transportation (DOT) as an oxidizer.

Under normal conditions hydrogen peroxide is extremely stable when properly stored. Rate loss in large containers such as tanks is less than 1% per year at normal ambient temperatures; in small containers, such as drums, rate loss is less than 2% per year. The larger the ratio of the storage container surface areas to the volume of hydrogen peroxide, the greater the rate loss.

Decomposition of hydrogen peroxide liberates oxygen and heat. In dilute solutions the heat evolved is readily absorbed by the water present. In more concentrated solutions, the heat raises the temperature of the solution and accelerates the decomposition rate. Special stabilizers are added during the manufacture of all grades of hydrogen peroxide to inhibit the catalytic decomposition effect of metals and other impurities that may accidentally contaminate the chemical during shipment, storage, and handling.

However, since no additive will prevent decomposition if excessive contamination occurs, the best practice is to prevent contamination through proper handling. All handling procedures must, therefore, be directed towards maintaining the same degree of purity and freedom from contamination as is maintained during the manufacturing process:

Hydrogen peroxide is not considered an explosive. However, when it is mixed with organic substances at significant concentrations, hazardous impact-sensitive compounds may result. Small amounts of other materials that contain catalysts (silver, lead, copper, chromium, mercury, and iron oxide rust) can cause rapid decomposition and an explosive pressure rupture of the containing vessel if it is not properly vented.

Decreasing temperatures have little effect on hydrogen peroxide until they drop substantially below 0 degrees C. Crystals do not begin to appear in 35% and 50% solutions until -33C (-27.4F) and -52.2C (-62F), respectively.

In addition to eye protection, rubber gloves and suitable protective clothing such as aprons or coveralls made of polyester acrylic fiber, polyvinyl chloride, polyethylene, or neoprene should be worn when handling concentrated hydrogen peroxide. Protective clothing, which lacks fire resistance, must be washed thoroughly with water should it come in contact with hydrogen peroxide. If allowed to dry in the fabric, the chemical may cause fire, particularly if the clothing is soiled.

Contact with moderate concentrations of hydrogen peroxide will cause whitening of the skin and stinging sensations. The whitening is due to the formation of gas bubbles in the epidermal layer of the skin. The stinging, in most cases, subsides quickly after thorough washing, and the skin gradually returns to normal without any damage. Highly concentrated hydrogen peroxide can cause blistering if left on skin surfaces for any length of time.

Hydrogen peroxide, a mild disinfectant, is useful in counteracting various microorganisms. Because of their antiseptic action, dilute hydrogen peroxide solutions (3% or less) are frequently used to treat open wounds and can be used as a gargle or mouthwash. However, contact or concentrated solutions (over 3%) with the members of the mouth is to be avoided. Under no circumstances should hydrogen peroxide be taken internally. If hydrogen peroxide is swallowed, drink water immediately to dilute, and contact a physician but do not attempt to cause vomiting.

In using hydrogen peroxide, safety should be first in the minds of everyone, and as with any other chemical, initial steps should be taken to familiarize all personnel with its safe and proper handling. Acceptance of hydrogen peroxide in a wide variety of industrial applications is a reflection of its simplicity in use.

Maximum safety in handling hydrogen peroxide is assured through the use of proper materials of construction, recognition of the need for venting in storage, and overall avoidance of contamination. The oxygen and water by-products of decomposition are innocuous, but splashing, inhaling vapor, and ingesting hydrogen peroxide must be avoided. If by unusual circumstances an accident should take place, flushing with large quantities of plain water is the simple corrective action needed. By adhering to straight-forward common sense procedures, every aspect of your operation will be aimed toward safety and a clean environment.